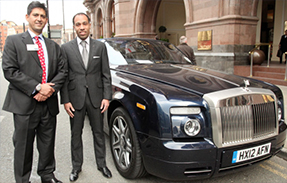 On 4th May 1904, Charles Stewart Rolls, a wealthy marketing savvy aristocrat, met Frederick Henry Royce, a miller’s son and brilliant engineer, at The Midland Hotel in Manchester. This historic meeting resulted in a partnership that would become world famous for engineering perfection and top end luxury: Rolls-Royce.

+91 organised a dazzling Luxury Brands Event on Wednesday 2nd May at The Midland Hotel, Manchester. The event explored how luxury brands like Rolls-Royce are targeting markets such as India, China and the Middle East, for future growth.

Rakesh Rawal, CEO, Codex said: “I am delighted that Rolls-Royce returned to its birthplace to participate in this Luxury Brands Event. It’s yet another great story in the rich history of Manchester and Britain”. When Rolls-Royce began, Britain was at the zenith of its power with its empire, and India was very much the “jewel in the crown”.

It was an India of Maharaja’s and princely states, and naturally a Rolls-Royce was the must have royal accessory of the day. Thomas Jefferson, Global Head of Sales and Communications, Rolls-Royce, said: “India became a very important market for Rolls-Royce cars right from the beginning, and many fine examples of cars from the period remain to this day. Most of the cars were custom made for the Maharajas for every possible occasion, including hunting and even taking teams to cricket matches..! “

But in modern times, its the Indian diaspora as well as the business elite in India that Rolls-Royce want to target. India has largely shaken off the global downturn and business confidence remains high. In the next 5 to 10 years Rolls-Royce expects India to be an essential market.

Rakesh Rawal, CEO Codex, said: “ Whilst doing the research for the event, I had a chance to learn more about the amazing history of Rolls-Royce, and I can only say that Rolls-Royce epitomises the “Great” in Great Britain. I believe affluent Indians will once again see Rolls-Royce as the ultimate symbol of success.”

Clive Wratten, CEO, Etihad UK, spoke about the remarkable rise of Etihad Airways. Established in only 2003, and despite sky high oil prices, Etihad has become one of the fastest growing airlines in commercial aviation history.

Clive Wratten’s presentation explained how a new brand like Etihad from Abu Dhabi, had taken on and overtaken most of the established players in the luxury travel business, and won a plethora of industry awards in the process. Other guest speakers at this Luxury Brands Event included: Edward Eisler, CEO, Jing – Luxury Tea; Dr Stewart Roper, Manchester Business School.

The event was generously sponsored and supported by the Manchester Business School, Murgitroyd & Co, Etihad Airways, and Asian Lite.

In attendance were CEOs, corporate executives, professionals, executives from the luxury industry, and the media, from across UK, Europe and India.

Read this article in the Asian Lite Newspaper